Reflections on the Original Wake Forest College Campus and Cemetery

In my African American Religious Experience class, I try to take students on a historical journey through the vibrant tapestry of the Black faith tradition. Through readings, lectures, films, and discussions, students are introduced to the diverse ways black people have found hope in faith while facing absurd odds. Beginning with West African cultural expressions, continuing through the Middle Passage experience, chattel slavery, and the development of the “Black Church,” students learn the ways African Americans contributed to our larger understanding of American religious history in general. Our trip to Wake Forest University’s original campus gave the students an even deeper level of engagement with challenging course material. The true gift of the trip was that it gave physical presence to the printed words in books merely describing religious experiences. We were ushered into physical spaces of African American religious faith while attentively listening for the voices of hopeful souls who once dwelled there.

Our sojourn to the original campus began with two pivotal yet unrelated conversations.

The first occurred 10 years ago in a hotel lobby in Lancaster, Pennsylvania. In a space filled with unassuming strangers, I had the honor of meeting Dr. Katie Geneva Cannon. Dr. Cannon was visiting my institution to deliver a distinguished lecture and generously agreed to meet and speak with me about my experience as a new professor.

I was nervous. Dr. Cannon was the mother of Womanist ethics and I was a newly minted Ph.D. She approached me with the grace and humility of one whose experience granted her authority in all things and yet was warm and welcoming. That day we discussed black religious life, race, and gender. I also shared a recent incident that occurred during a lecture I delivered at another institution.

“It was as though the buried ancestors felt my presence and knew I longed to commune with them.”

The lecture was on a chapter from my first book. During the question-and-answer period,  I was challenged by a historian about why I had chosen to make a central argument about the function and nature of black religious leaders using the fictional character Baby Suggs Holy from Toni Morrison’s Beloved. The historian argued that one must always use real historical figures to make historical claims. Even though I had used an abundance of historical evidence in that chapter, centralizing Baby Suggs Holy to advance a historically informed interpretive claim was troubling to this historian.

I told this to Dr. Cannon, who gave me the look that a mother gives a child when being sympathetic. It is the look often followed by the sentiment expressed by so many black mothers, “Bless your heart.” Dr. Cannon proceeded to say something to me that would forever change my academic thinking and help me to better understand why so many Womanist scholars work to strategically expand the theological canon. She told me to maintain my use of fiction and literature because, as she put it, fiction “brings people into the holy of holies in ways history never can.” Dr. Cannon’s words and encouragement allowed me to pivot from conventional notions of what was “valuable” scholarship to an expanded idea of the possibilities that could be drawn from alternative sources.

My encounter with Dr. Cannon pushed me to consider what it means to find out things that I did not know I needed to know. This idea leads me to the second conversation, which birthed the idea for this interactive experience to be incorporated into the class.

Sarah Soleim, Manager of Community and Academic Learning at the Wake Forest Historical Museum, invited me to meet to discuss my teaching and research. After telling her about my African American Religious Experience course, she excitedly told me about an archeological discovery that revealed the existence of what was called an “African Chapel” on Wake Forest University’s original campus. We discussed the evidence still being gathered about the chapel and how it was utilized by the unsung builders of our institution—enslaved people who constructed the university’s early buildings. These individuals toiled, bled, and died to create what would eventually become a top university in the United States. This African Chapel would be a place of solace and sanctuary for a people forced to come to grips with life under the regime of chattel slavery.

These two conversations informed my decision to include a trip to the original campus as a part of my students’ learning experience. I realized, however, that merely seeing and walking the campus grounds was not enough. I wanted the students to reflect on the complexities of race, faith, slavery, labor, and death. Indeed, Dr. Cannon’s notion of the “holy of holies” provided a way to value the reflective work of my students. I wanted them to interact with the souls of those unsung builders of Wake Forest University as they walked the spaces that the forgotten had once inhabited.

To do this, I enlisted the support of brilliant local poet Jacinta White. Jacinta’s recently published book of poetry and short stories, Resurrecting the Bones: Born from a Journey through African American Churches and Cemeteries in the Rural South, chronicles her journey to over 35 historic black churches and cemeteries in the South.[1] She offers deep reflections on what it means to walk the sacred grounds of unsettled souls. I wanted my class to experience something similar on the original campus and at the Old Cemetery belonging to nearby Friendship Chapel Baptist Church. What resulted was a meaningful class trip that was only matched by the insightful poems the students wrote under Jacinta’s instruction.

The most moving moment of the visit took place at the Old Cemetery. This sacred burial ground is likely the final resting place to some of those unsung builders of Wake Forest University’s original campus. To know that we were entering the space where these particular ancestors rested may have been enough. But what I personally experienced in that cemetery stirred something even more profound. As we stepped off the bus, we saw a mass of trees in front of us. Strikingly, this section of trees was nestled between two developments of new single-family homes on both sides. We walked toward this nondescript group of trees and were greeted by a “No Trespassing” sign. No other signs were posted informing us of the existence of the cemetery or detailing the sacredness of the space. 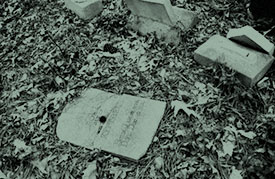 We pressed forward and were led into an opening that seemingly came out of nowhere. We stepped through the threshold, banked right on uneven soil and then turned slightly left. We then came upon grave stones. Only then did I realize the expanse of this sacred space. The beautifully hand-carved tombstones, some with names and dates, others with only simple designs, announced the majesty of the souls resting there. I was struck by how cold it was under the canopy of trees. The wind was swirling and singing. Yet, despite the cold and wind, heat seemed to rise up from the ground and warm my feet. It was as though the buried ancestors felt my presence and knew I longed to commune with them. They welcomed me by warming my every step.

The feeling I had under the tree canopy would be repeated at the site of the African Chapel on the original campus. The souls of the ancestors would welcome me by warming the soles of my feet. On that day, they were calling upon us to tell their stories. I believe they were saying that to us as a university. They require us to be what Edith Wyschogrod calls “heterological historians” and abide by an ethics of remembering in telling the stories of those systematically silenced.[2] We are therefore called to give voice to often nameless souls. We do this with a spirit of hope. This work calls for us to acknowledge these souls, their lives and their stories as a part of the full history of Wake Forest University. It is a history that requires verbal and written apologies and more. It is a story that must stir in us new efforts to understand our connection to slavery in ways that fundamentally change us at our core. Only then can we become the university that our students deserve.

[2] Edith Wyschogrod, An Ethics of Remembering: History, Heterology, and the Nameless Others (Chicago: The University of Chicago Press, 1998.