The Waits, Women and Slavery

“Our strong and prevailing objection to the south is, slavery.”[1]
Achsah Merriam to Sally Merriam Wait; Passumpsic, Vermont; April 7, 1834

When Achsah Merriam wrote the words noted above to her sister-in-law, the Wake Forest Institute that Samuel and Sarah Merriam Wait helped build was barely three months old. Since her marriage to Samuel Wait in 1818, Sally, as she was known, agonized over the couple’s calling as they considered missions to Burma, India, and the American West before settling on North Carolina as their mission field. The Waits had lived intermittently apart nearly half of their first 16 years of marriage. Samuel moved around to study, teach, preach, raise money, and look for a reliable ministerial position while Sally remained in the preferred surroundings of her New England birth. When Samuel’s work ultimately brought them to a former plantation in North Carolina to start a school to train Baptist ministers, Sally found herself in a place with values different from those of her anti-slavery family and friends back in Vermont. How she assimilated into a culture and economy based in slavery is part of the story of a Baptist couple and the founding of a university in the early 19th century.

Sally believed that she was called to do the Lord’s work. This had been clear to her since that pivotal day in 1813 when she emerged from what she described as the “dark clouds” of despair to the “bright and resplendent” sun of religious conversion.[2] Sally grew up in a time of widespread religious fervor and constant religious revivals. For many young people, conversion represented a coming of age. For Sally, it elicited a lifelong commitment to spread the gospel.

Sally’s pious ambition was inspired by Ann Hasseltine Judson, a missionary to Burma whose story was reported in the religious tracts that helped fuel the Second Great Awakening. Like thousands of evangelical women, Sally latched onto Judson’s story, imagining herself in an exotic location serving as a pious helpmate to her missionary husband. After the Waits married, Samuel’s ambitions led him to Washington, D.C., in 1821 to study and then teach at Columbian College, which would evolve into George Washington University.

Once Sally joined Samuel in Washington in late 1822, she settled into Columbian College’s southern lifestyle and its culture of slavery. She and others from the college occasionally visited a family on a neighboring estate where she first experienced the southern plantation system of slavery.

Enslaved people also worked for Columbian College families where the Waits boarded. In their letters, Sally and her friends referred to “Uncle Richard, Aunt Betsey” and a man known as “Goodfellow.”[3] In the nearby capital city, shackled and enslaved people being transported for trade was a common sight. On trips into the city, Sally would have seen the workings of the domestic slave trade. Despite the ubiquity of slavery and the few mentions of enslaved workers who served College Hill, Sally recorded little of her impressions of slavery during their time at Columbian College. 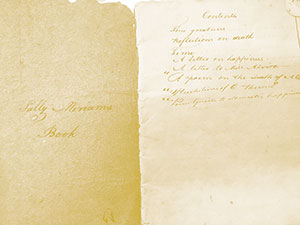 Samuel Wait’s time at Columbian College ended after the institution’s finances spiraled into a dismal state of affairs. On a last-ditch fundraising trip, a carriage accident temporarily sidelined him in New Bern, North Carolina. During this delay, the city’s preacher-less Baptists began a concerted campaign to recruit him to stay. Unlike the District of Columbia, which was a sparsely constructed government center surrounded by swampy plantations, New Bern was a thriving port city of 5,000 residents. Approximately 60% of the population was black, with enslaved and free African-American men and women working as domestic workers, draymen, port workers, mariners, artisans, businessmen, and farmers. When Samuel was invited to become the minister at New Bern Baptist Church in 1827, the membership consisted of 22 white people and eight black people, two of whom were likely free. At the time, New Bern was a cosmopolitan town, described as a place of fashionable extravagance and fine living.

Sally responded ambiguously to Samuel’s initial letters recruiting her to join him in New Bern. She was concerned about raising their daughter, Ann Eliza, in North Carolina, a place she described as filled with “much ignorance and bigotry,” referring to the anti-education and anti-mission movement pervasive throughout the state. Sally did not explicitly name slavery when she wrote to a friend that their “objections to bringing up our children here, still remain with all their force.”[4]

While Sally did not record specific concerns about slavery in her surviving letters, her family expressed their horror at the idea of the Waits settling in a slave state. Sally’s brother Isaac wrote he was unable to “believe you can always endure slavery before your eyes.”[5] In the end, Samuel prevailed and Sally agreed to move to North Carolina, a place far removed from the family and society that were familiar to her.

“Despite any earlier concerns they may have had, Samuel and Sally became part of the powerful system of slavery…”

The Waits brought a white servant girl from Vermont with them to New Bern. Doratha probably lived in the Waits’ rented home for approximately two years, tending to household chores and the children, Ann Eliza and newborn William Carey. But by the summer of 1830, just a few months before Samuel resigned from the church, Doratha was no longer there. Her unexplained disappearance corresponds with evidence that the longer the Waits stayed in the South, the more they became active participants in the culture of slavery. On the 1830 Federal census, two enslaved women appeared in the Waits’ household: a woman between 24 and 35 and a girl under the age of 10.[6] The Waits had made a choice to have slaves in their household.

Sally’s mother, Sarah Conant Merriam, reiterated her admonition that Sally had “two lovely children whose morals you have got to cultivate” and pleaded with her that

“can you not . . . weigh the consequences of endangering the Souls of your children . . . before you settle again in a land of slavery?”[7]

Her mother’s concerns would escalate the following year. Two months after the couple’s final return to North Carolina in late 1831, Nat Turner was captured after leading a bloody rebellion in nearby Southampton County, Virginia. Just days after Turner was executed, Sally’s mother wrote to her about reports “that the whites are very much incensed against the Baptist and Quakers [and] think their liberal principles are one great cause of the tumult and insurrection.” While many Southern whites were threatening and enacting vengeance on the enslaved population after the Turner rebellion, Sally’s mother feared retaliation on Sally and Samuel for their religious views. She wrote, “If that is the case you are in danger of imprisonment or assassination. You will therefore be cautious of your words and action.”[8]

As tensions escalated, Baptist publications cautioned ministers about publicly speaking out against slavery or taking political stands of any kind, writing that it was “not their business to manage the world.”[9] Indeed, Samuel left little indication of his stance on slavery in his writings, choosing to focus on the salvation of souls rather than address what he would consider more temporal matters.

When he accepted a position with the North Carolina Baptist Convention, he continued to address biracial audiences at backwoods revivals, sometimes alongside black preachers. By the time the convention established Wake Forest College, the Waits were firmly enmeshed in the culture of slavery. In 1839, Samuel purchased two enslaved women who provided domestic work for the family and a boarding house they ran. They also hired enslaved men to assist with a small farm the Waits purchased near the school. Despite any earlier concerns they may have had, Samuel and Sally became a part of the powerful system of slavery, becoming slaveholders themselves.

When I started researching Sally’s story several years ago, I imagined learning about the grandmotherly ancestor and pious helpmate that Sally envisioned herself to be. Instead, the person I met in the archives was a fiery and resourceful woman whose aspirations pushed against the limits of her early 19th century woman’s sphere. Even so, she did not challenge the prevailing system of slavery.

I grew up as a descendent of the Waits. Our family lore held that as a Baptist minister constantly scraping to make ends meet, Samuel Wait would not have owned enslaved workers. Embracing the idealism of the Wake Forest University narrative, we wanted to believe in a certain exceptionalism in which the Waits would reject the dominant social and economic system that surrounded them.

[9] Sharp, “Review: Counsels and Cautions The Substance of an Address Read before the Conference of Baptist Ministers in Massachusetts, at Their Annual Meeting in Boston, May 27, 1835.”